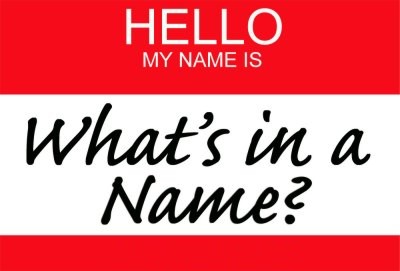 What’s in A Name?

OCOSBE Blog • Comments Off on What’s in A Name?

Several years ago the Associated Press carried a story from England about a couple that gave their newborn daughter 139 names. They said they will call her Tracy, but officially, she will be: Tracy Mariclaire Lisa Tammy Samantha Christin Alexandra (you get the idea). When the father was asked why he said, “We just wanted to give her something for when she grows up.” Obviously these parents were not thinking about the meaning of her names. They just wanted something unusual.

All through Scripture there is an importance given to names. In the Hebrew and Greek mindset, names were more than just a title to call someone; it was a revelation of the persons character.

In Genesis 32 Jacob (whose name meant cheat, usurper) wrestled with an angel. His name was changed to Israel or “to struggle with God.” Jesus Christ gave Simon the name Peter which means “rock.”

My name “John” means “God is a gracious giver.” But we will not go there today.

At Christmas we celebrate the birth of Jesus, who has many names. However, in our Lord’s case ALL of His titles are very significant. Today we focus on one of those titles. Isaiah 9:6 (NASB) “For a child will be born to us, a son will be given to us; And the government will rest on His shoulders; And His name will be called Wonderful, Counselor, Mighty God, Eternal Father, Prince of Peace.”

His Name is Wonderful

We sing the song “His Name is Wonderful” in our churches today. The Old Testament word for Wonderful can be translated several ways. It can be translated as “Miraculous” or “Lovely.” It can also can mean “Distinguished” or “Apart from the rest.” It is a word of awe, astonishment and reverence. You might ask “What was wonderful about Jesus Christ, the Messiah?”

Jesus was born like no other person in the world. He was born from a woman that was a virgin. Matthew 1:23-25 (NASB) ” BEHOLD, THE VIRGIN SHALL BE WITH CHILD, AND SHALL BEAR A SON, AND THEY SHALL CALL HIS NAME IMMANUEL,” which translated means, ” GOD WITH US.” 24 And Joseph arose from his sleep, and did as the angel of the Lord commanded him, and took her as his wife, 25 and kept her a virgin until she gave birth to a Son; and he called His name Jesus.

Jesus did what no other could have ever done; He lived a perfectly sinless life. He never did anything that was wrong. 2 Corinthians 5:21 (NASB) “He made Him who knew no sin to be sin on our behalf, that we might become the righteousness of God in Him.”

This was the only reason that He could be the Sacrifice for all of our sins; He had never sinned. If He had sinned EVEN ONCE, the He would have died for His own sins, not ours.

Why is Jesus death wonderful? Because, without His death we could not know the true meaning of life. It is because of His death on the Cross that you and I might be saved.

In His Wonderful resurrection He conquered death.

His Name is Wonderful!

« What is Missing in Evangelism? Story of a Changed Life »